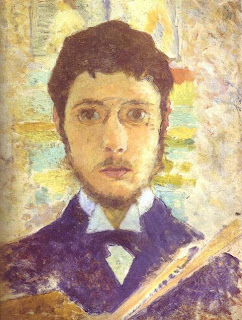 Pierre Bonnard Art Gallery
Article from Wikipedia
Pierre Bonnard (3 October 1867 – 23 January 1947) was a French painter and printmaker, as well as a founding member of Les Nabis.

Bonnard was born in Fontenay-aux-Roses, Hauts-de-Seine. He led a happy and carefree youth as the son of a prominent official of the French Ministry of War. At the insistence of his father, Bonnard studied law, graduating and practising as a barrister briefly. However, he had also attended art classes on the side, and soon decided to become an artist.

In 1891 he met Toulouse-Lautrec and began showing his work at the annual exhibition of the Société des Artistes Indépendants. His first show was at the Galerie Durand-Ruel in 1896.

In his twenties he was a part of Les Nabis, a group of young artists committed to creating work of symbolic and spiritual nature. Other Nabis include Édouard Vuillard and Maurice Denis. He left Paris in 1910 for the south of France.

Bonnard is known for his intense use of color, especially via areas built with small brushmarks and close values. His often complex compositions—typically of sunlit interiors of rooms and gardens populated with friends and family members—are both narrative and autobiographical. His wife Marthe was an ever-present subject over the course of several decades. She is seen seated at the kitchen table, with the remnants of a meal; or nude, as in a series of paintings where she reclines in the bathtub. He also painted several self-portraits, landscapes, and many still lifes which usually depict flowers and fruit.

Bonnard did not paint from life but rather drew his subject—sometimes photographing it as well—and made notes on the colors. He then painted the canvas in his studio from his notes.

In 1938 there was a major exhibition of his work along with Vuillard's at the Art Institute of Chicago. He finished his last painting, The Almond Tree in Flower, a week before his death in his cottage on La Route de Serra Capeou near Le Cannet, on the French Riviera, in 1947. The Museum of Modern Art in New York City organized a posthumous retrospective of Bonnard's work in 1948, although originally it was meant to be a celebration of the artist's eightieth birthday.

Two major exhibitions of Bonnard's work took place in 1998: February through May at the Tate Gallery in London, and from June through October at the Museum of Modern Art in New York City.
Posted by Admin at 5:51 PM