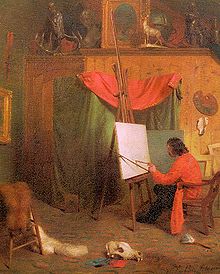 He was a prolific worker and a man of much inventiveness and originality, though of modest artistic endowment. His humorous treatment of bears, cats, dogs, horses and monkeys, generally with some human occupation and expression, usually satirical, gave him a great vogue at one time, and his pictures were largely reproduced.

William is buried in Green-Wood Cemetery in Brooklyn, New York.


Article from Wikipedia
Posted by Admin at 10:50 AM