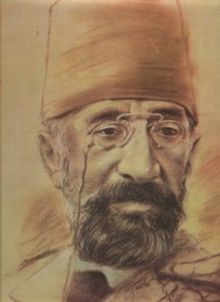 Osman Hamdi Bey Biography
Osman Hamdi Bey (1842 – 24 February 1910) was an Ottoman statesman, intellectual, art expert and also a prominent and pioneering Turkish painter. He was also an accomplished archaeologist, and is considered as the pioneer of the museum curator's profession in Turkey. He was the founder of Istanbul Archaeology Museums and of İstanbul Academy of Fine Arts (Sanayi-i Nefise Mektebi in Turkish), known today as the Mimar Sinan University of Fine Arts.

Osman Hamdi was the son of İbrahim Edhem Pasha a former Grand Vizier who was a Greek boy from the island of Chios orphaned at a very young age  following the 1821 Greek uprising there. He was adopted by Kaptan-I Derya Husrev Pasha and eventually rising to the ranks of the ruling class of the Ottoman Empire.

Osman Hamdi went to primary school in the popular Istanbul quarter of Beşiktaş, after which he studied Law, first in Istanbul (1856), and then in Paris (1860). However, he decided to pursue his interest in painting instead, left the law program, and trained under French orientalist painters Jean-Léon Gérôme and Gustave Boulanger. During his nine-year stay in Paris, the international capital of fine arts in that period, he showed a keen interest for the artistic events of his day. He also met many of the Young Turks and though exposed to their liberal ideas, as the son of a loyal Ottoman Paşa, did not participate in their activities.

Osman Hamdi also met his first wife Maria, a French woman, in Paris when he was a student. After receiving his father's blessings, she accompanied him to Istanbul when he returned in 1869, where the two got married and had two daughters.

His stay in Paris was also marked with the first visit ever by an Ottoman sultan to Europe where Abdülaziz was invited to the Exposition Universelle (1867) by Emperor Napoleon III.

Once back in Turkey, he was sent to the Ottoman province of Baghdad, as part of the administrative team of Midhat Pasa, who would later become an important reformer of the Tanzimat. In 1871, he returned to Istanbul, as the vice-director of the Protocol Office of the Palace. During the 1870s, he worked on several assignments in the upper echelons of the Ottoman bureaucracy.

Osman Hamdi exhibited three paintings at the 1867 Paris Exposition Universelle. None seem to have survived today, but their titles were Repose of the Gypsies, Black Sea Soldier Lying in Wait, and Death of the Soldier. An important step in his career was his assignment as the director of the Imperial Museum (Müze-i Hümayun) in 1881. He used his position as museum director to develop the museum and rewrite the antiquities laws and to create nationally sponsored archaeological expeditions. In 1882, he instituted and became director of the Academy of Fine Arts, which provided Ottomans with training in aesthetics and artistic techniques without leaving the empire. In 1884, he oversaw the promulgation of a Regulation prohibiting historical artifacts from being smuggled abroad (Asar-ı Atîka Nizamnamesi), a giant step in constituting a legal framework of preservation of the antiquities. Representatives or middlemen of 19th century European Powers routinely smuggled artifacts with historical value from within the boundaries of the Ottoman Empire (which then comprised the geographies of ancient Greek and Mesopotamian civilizations, among others), often resorting to shadily obtained licenses or bribes, to enrich museums in European capitals.

He conducted the first scientific based archaeological researches done by a Turkish team. His digs included sites as varied as the Commagene tomb-sanctuary in Nemrut Dağı in southeastern Anatolia (a top tourist's venue in Turkey and a UNESCO World Heritage Site today, within the Adıyaman Province), the Hekate sanctuary in Lagina in southwestern Anatolia (also much visited, and within the Muğla Province today), and Sidon in Lebanon. The sarcophagi he discovered in Sidon (including the one known as the Alexander Sarcophagus, although this sarcophagus is thought to contain the remains of a Persian noble who was also the governor of Babylon.) are considered among the worldwide jewels of archaeological findings. To lodge these, he started building what is today the Istanbul Archaeology Museum in 1881. The museum officially opened in 1891 under his directorship.

Throughout his professional career as museum and academy director, Osman Hamdi continued to paint in the style of his teachers, Gérôme and Boulanger.

* He was the granduncle of Cemal Reşit Rey, one of the five pioneers of classical music in Turkey (termed the 'The Turkish Five')
* A brother, İsmail Galib Bey, is considered the founder of numismatics as a scientific discipline in Turkey.

His 1906 painting, "The Tortoise Trainer", recently broke a record in Turkey by being sold for the amount of 3.5 million dollars in December 2004. The painting expresses a sarcastic innuendo on the painter's own view of his style of work compared to those of his collaborators and apprentices, and is also a reference to the historical fact of tortoises having been employed for illuminative and decorative purposes, by placing candles on the shell, in evening outings during the Tulip Era in the early 18th century. The painting was acquired by the Suna and İnan Kıraç Foundation and is currently on display at the Pera Museum in İstanbul, which was established by this foundation.

Modern researchers have identified the animals portrayed are Testudo graeca ibera, a variety of the Spur-thighed Tortoise. A reproduction of the painting appeared on the cover of the Bibliotheca Herpetologica issue in which the paper about the identification was published.