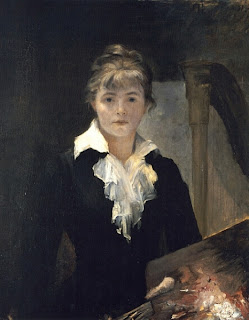 Marie Bashkirtseff Art
Marie Bashkirtseff Biography
Born Maria Konstantinovna Bashkirtseva in Gavrontsi near Poltava, to a wealthy noble family, she grew up abroad, traveling with her mother across most of Europe. Educated privately, she studied painting in France at the Académie Julian, one of the few establishments that accepted female students. The Académie attracted young women from all over Europe and the United States. One fellow student was Louise Breslau, who Bashkirtseff viewed as her only rival. Bashkirtseff would go on to produce a remarkable body of work in her short lifetime, the most famous being the portrait of Paris slum children titled The Meeting and In the Studio, (shown here) a portrait of her fellow artists at work. Unfortunately, a large number of Bashkirtseff's works were destroyed during World War II.

From the age of 13, Bashkirtseff began keeping a journal, and it is for this that she is most famous. Her personal account of the struggles of women artists is documented in her published journals, which are a revealing story of the bourgeoisie. Titled, I Am the Most Interesting Book of All, her popular diary is still in print today. The diary was cited by an American contemporary, Mary MacLane, whose own shockingly confessional diary drew inspiration from Bashkirtseff's. Her letters, consisting of her correspondence with the writer Guy de Maupassant, were published in 1891.

Dying of tuberculosis at the age of 25, Bashkirtseff lived just long enough to become an intellectual powerhouse in Paris in the 1880s. A feminist, in 1881, using the nom de plume "Pauline Orrel," she wrote several articles for Hubertine Auclert's feminist newspaper, La Citoyenne. One of her famous quotes is: Let us love dogs, let us love only dogs! Men and cats are unworthy creatures.

She is buried in Cimetière de Passy, Paris, France. Her monument is a full-sized artist studio that has been declared a historic monument by the government of France.


Article from Wikipedia
Posted by Admin at 11:39 AM