Frank Weston Benson
Frank Weston Benson, frequently referred to as Frank W. Benson, (March 24, 1862 – November 15, 1951) was an American artist from Salem, Massachusetts known for his Realistic portraits, American Impressionist paintings, watercolors and etchings. He began his career painting portraits of distinguished families and murals for the Library of Congress. Some of his best known paintings (Eleanor, Museum of Fine Arts, Boston; Summer, Rhode Island School of Design Museum) depict his daughters outdoors at Benson's summer home, Wooster Farm, on the island of North Haven, Maine. He also produced numerous oil, wash and watercolor paintings and etchings of wildfowl and landscapes. 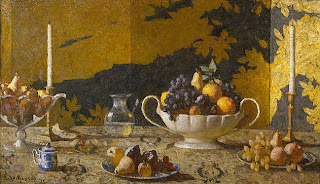 Frank Weston Benson was born to George Wiggin Benson, a successful cotton broker, and Elisabeth Poole,  from families who founded Salem, Massachusetts. Benson obtained his appreciation of the sea from his grandfather, Captain Samuel Benson. When he was 12, he was given a sailboat in which he explored the waterways and marshes and raced against his siblings. To encourage educational activity, Benson's parents gave their children a weekly allowance to foster independent study and hobbies, such as Salem's Hamilton Hall dance classes, Lyceum lectures or equipment for photography. The children kept active roller-skating, tennis, ice-skating, boxing, fishing and hunting.

Benson's father gave him a shotgun and taught him how to hunt shore birds along the North Shore and wildfowl in the local fields and marshes. He spent nearly all of his weekends hunting or fishing in the fields, marshes and streams. To his good friend Dan Henderson, he wrote of their childhood adventures:

"We used to spend our Saturdays chasing coot and old squaws in Salem Harbor. Then, after working hard all day to get one bird, in we would assemble at Sam Shrum’s or mine and chew the rag until we were so sleepy we could not hold up our heads. What a minute account each had to give of each movement of every bird seen and every shot missed. It was almost criminal to miss an easy shot in those days, so many excuses had to be invented. One word would have served for all in my case if it had been invented then, I was generally 'rattled,' I think, when you and I went ducking."

His brother, John Prentiss Benson, was an architect and painter in his own right. Both sons may have been influenced by their mother, Elisabeth Poole Benson, who Frank once remarked, had "a little room" on the top floor of their house where she would go to paint and "forget about the rest of the world".
Artistic studies

An avid birdwatcher and wildfowl hunter, Benson wanted to be an ornithological illustrator. At the age of 16, he painted Rail, one of his first oil paintings, after a hunting trip. He began his studies at the School of the Museum of Fine Arts, Boston in 1880, and there befriended Joseph Lindon Smith, Robert Reid and Edmund Charles Tarbell. Capitalizing on what he learned, Benson held drawing classes in Salem and painted landscapes during the summer of 1882.

On Benson's 21st birthday his parents gave him a gift of $2,000 to study in Europe. He traveled to Paris and studied at the Académie Julian from 1883 to 1884 with Edmund Tarbell and Joseph Lindon Smith; Joseph Lindon Smith and Benson shared an apartment. At the Academy, Benson studied under Jules-Joseph Lefebvre, William Turner Dannat, and Gustave Boulanger. Gustave Boulanger, one of Benson's teachers at Académie Julian, said to him: "Young man, your career is in your hands... you will do very well." After his study at Académie Julian, Benson traveled to England's Royal Academy to see his painting "After the Storm" on exhibit.


Article from Wikipedia
Posted by Admin at 2:42 PM