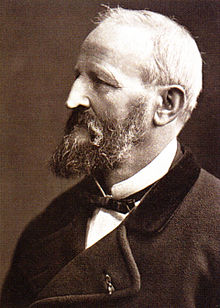 
Karl Bodmer (6 February 1809 – 30 October 1893) was a Swiss painter of the American West. He accompanied German explorer Maximilian zu Wied-Neuwied from 1832 through 1834 on his Missouri River expedition. He was hired as an artist by Maximilian with the specific intent of traveling through the American West and recording images of the different tribes they saw along the way.

Karl Bodmer was born on 6 February 1809 in Zürich, Switzerland. When he was thirteen years old, his mother’s brother, Johann Jakob Meier, became Bodmer's teacher. Meier was an artist, having studied under the well-known artists Heinrich Füssli and Gabriel Lory. Young Bodmer and his older brother, Rudolf, joined their uncle on artistic travels throughout their home country.

A major turning point in Bodmer's life was his being contracted to the Prinz Maximilian zu Wied-Neuwied. Known popularly to naturalists then and even now as Prince Max, this German aristocrat, having successfully led a scientific expedition to Brazil in 1815–1817, decided to embark on another such venture, this time to North America.

By 1828, Bodmer had left his native Switzerland for the German city of Koblenz. It was there that he came to Prince Max's attention. After delays, Bodmer, in the company of Prince Max and a huntsman and taxidermist, David Dreidoppel, set out for America on 17 May 1832. In a letter bearing that date, Prince Max wrote to his brother that Bodmer "is a lively, very good man and companion, seems well educated, and is very pleasant and very suitable for me; I am glad I picked him. He makes no demands, and in diligence he is never lacking."

Arriving in Boston on 4 July, the three encountered hardships and delays caused largely by a cholera epidemic in the eastern states that swept across the north to Michigan. It was not until 8 October that the three began their journey down the Ohio River from Pittsburgh, arriving in Mt. Vernon, Indiana about midnight on 18 October. The next morning, the party made their way to New Harmony, Indiana.

In his famous book chronicling the expedition, Maximilian Prince of Wied's Travels in the Interior of North America, the Prince wrote, "I had been indisposed, as well as my huntsman, since I left Louisville, and was not in a mood properly to appreciate the fine, lofty forests of Indiana, the road through which was very bad and rough."

Prince Max had planned to spend only a few days in New Harmony, but his stay "was prolonged by serious indisposition, nearly resembling cholera, to a four months' winter residence." The Prince devotes a whole chapter of his book to New Harmony, its environs, and to the work and personalities of two leading American naturalists who lived there, Thomas Say and Charles-Alexandre Lesueur. Lesueur was also a prolific artist.

Unlike the Prince and the huntsman, Bodmer was not ill-disposed. Alone, he left New Harmony at the end of December, and on 3 January 1833 caught a steamboat at Mt. Vernon. He traveled to New Orleans and spent a week with Joseph Barrabino, an Italian-American naturalist and friend of Say and Lesueur. A fine pencil portrait of Barrabino, drawn by Lesueur, is preserved at the New Harmony Workingmen's Institute.

When the expedition was complete, he returned to Germany with Prince Maximilian, then traveled to France. In Paris he had many scenes from the expedition (81 in total) reproduced as aquatints. The Prince had these images incorporated into his book, which was published in London in 1839. After returning to Europe, Bodmer lived in Barbizon, France, where he became a French citizen. At that point he changed his name to "Charles Bodmer". Today the majority of his original watercolours are located in three collections in the United States, with the majority of them located at the Joslyn Art Museum in Omaha, Nebraska. They are recognised as among the most painstakingly accurate painted images ever made of Native Americans, their culture and artefacts, and of the scenery of the pristine "Old West".