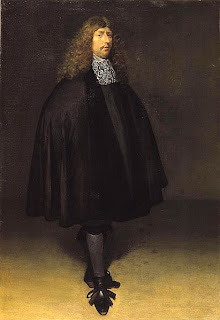 Gerard ter Borch was born in December 1617 in Zwolle in the province of Overijssel in the Dutch Republic.

He received an excellent education from his father, also an artist, and developed his talent very early. The inscription on a study of a head proves that Ter Borch was at Amsterdam in 1632, where he studied possibly under Willem Cornelisz Duyster or Pieter Codde. Duyster's influence can be traced in a picture bearing the date 1638, in the lonides Bequest (Victoria and Albert Museum). In 1634 he studied under Pieter de Molijn in Haarlem. A record of this Haarlem period is the Consultation (1635) at the Berlin Gallery.

In 1635 he was in London, and subsequently he travelled in Germany, France, Spain and Italy. It is certain that he was in Rome in 1641, when he painted the small portraits on copper of Jan Six and A Young Lady (Six Collection, Amsterdam). In 1648 he was at Münster during the meeting of the congress which ratified the treaty of peace between the Spaniards and the Dutch, and executed his celebrated little picture, painted upon copper, of the assembled plenipotentiaries--a work which, along with the a portrait of a Man Standing, now represents the master in the national collection in London. The picture was bought by the marquess of Hertford at the Demidoff sale for 1280, and presented to the National Gallery by Sir Richard Wallace, at the suggestion of his secretary, Sir John Murray Scott.

At this time Ter Borch was invited to visit Madrid, where he received employment and the honour of knighthood from Philip IV, but, in consequence of an intrigue, it is said, he was obliged to return to the Netherlands. He seems to have resided for a time in Haarlem; but he finally settled in Deventer, where he became a member of the town council, as which he appears in the portrait now in the gallery of the Hague. He died at Deventer in 1681.

Ter Borch is excellent as a portrait painter, but still greater as a painter of genre subjects. He depicts with admirable truth the life of the wealthy and cultured classes of his time, and his work is free from any touch of the grossness which finds so large a place in Dutch art.[not specific enough to verify] His figures are well drawn and expressive in attitude; his colouring is clear and rich, but his best skill lies in his unequalled rendering of texture in draperies, which is seen to advantage in such pictures as The Letter and in The Gallant Conversation engraved by Wille – which exists in various repetitions at Berlin and Amsterdam, and in the Bridgewater Gallery.

Ter Borch's works are comparatively rare; only about eighty have been catalogued. Six of these are at the Hermitage, six at the Berlin Museum, five at the Louvre, four at the Dresden Museum, three at the Getty Center, and two at the Wallace Collection. A pair of portraits are located at the Corcoran Gallery in Washington D.C., highlighted in 2010 by Blake Gopnik.