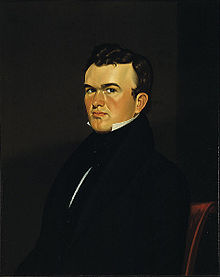 George Caleb Bingham Biography
George Caleb Bingham (March 20, 1811 – July 7, 1879) was an American artist whose paintings of American life in the frontier lands along the Missouri River exemplify the Luminist style. Left to languish in obscurity, Bingham's work was rediscovered in the 1930s. He is now widely considered one of the greatest American painters of the 19th century.

Born in Augusta County, Virginia, Bingham was the second of seven children of Mary Amend and Henry Vest Bingham. Upon their marriage, Mary's father Matthias Amend gave Bingham ownership of the family mill, 1,180 acres (4.8 km2) land, and several slaves with the agreement that Matthias could live with the family for the rest of his life. Henry Bingham offered the land and mill as surety for a friend's debt and, when the friend died in 1818, all was lost. The Bingham family soon moved to Franklin, Missouri "where the land was said to be bountiful, fertile and cheap."

Bingham was a self-taught artist. His sole childhood exposure to the field was as a nine-year-old boy, when famed American portraitist Chester Harding visited Franklin looking for business, having recently sketched Daniel Boone in Warren County, Missouri. George assisted Harding during his brief stay, an experience that left a powerful impression.

In 1823, Bingham's father Henry, then judge of Howard County Court, died of malaria on December 26 at the age of thirty-eight. To keep the family going, Mary Bingham opened a school for girls; George, then twelve, worked as school janitor to help keep the family afloat. At age sixteen, Bingham apprenticed with cabinet maker Jesse Green. After Green moved away, Bingham apprenticed with another cabinet maker, Justinian Williams. Both tradesmen were Methodist ministers. While under their tutelage, Bingham studied religious texts, preached at camp meetings and thought about becoming a minister. He also considered becoming a lawyer.

By age nineteen, Bingham was painting portraits for $20.00 apiece, often completing the works in a single day. He drummed up work in both Franklin and Arrow Rock and, while his painting abilities were still developing, succeeded in impressing his patrons with his strong draftsmanship and ability to capture the likeness of his subject. Soon Bingham was ready to travel to St. Louis to ply his trade but contracted measles. The illness left him weak and permanently bald.

In 1836, Bingham married Sarah Elizabeth Hutchison, who bore him four children over the next twelve years. From 1837-1845 they lived in Arrow Rock, Saline County, where their house has been designated a National Historic Landmark. She died in 1848 at the age of twenty-nine. Before his mother Mary died in 1851, she helped Bingham rear his children.

George married twice more, first to Eliza Thomas, who had to be institutionalized and died in a mental asylum in 1876. He next married Martha Lykins, who lived until 1890.

By 1838, Bingham was already beginning to make a name as a portrait artist in St. Louis, the major city of the territory; his studio was visited by several prominent local citizens and statesmen, including the lawyer James S. Rollins, who was to become a life-long friend. While he frequently worked in the city, Bingham kept his principal residence in Arrow Rock for years. To further his education, Bingham spent three months in Philadelphia, Pennsylvania before continuing on to New York City to visit the National Academy of Design exhibition.

After moving his family to St. Louis permanently, in 1848 Bingham was elected to the Missouri General Assembly, one of the few artists to serve in elected political office. His interest in politics was reflected in his paintings of the vivid political life on the frontier. Bingham later took several state political appointments as well.

In 1856 Bingham moved to Europe with his second wife Eliza and youngest daughter. First they stayed in Paris for several months, where Bingham fulfilled a long-cherished desire and studied the Old Masters at the Louvre Museum, likely his chief reason for going abroad. They went on to Düsseldorf, Germany, where they lived until 1859, taking part in the Düsseldorf school of painting. Bingham lived and worked among the American and German artists of the art colony, among whom was the German-American Emanuel Leutze, the most prominent historical painter in the United States. (Washington Crossing the Delaware was then his most famous work.) Leutze was unusual for living in both countries and had an open studio in Düsseldorf, where he welcomed Bingham as a friend and already successful artist. While in Germany, Bingham worked on important commissions from the Missouri State Legislature, as well as independent paintings.

Upon his return to America, Bingham began painting more portraits, which had always been his "bread and butter" work. He also returned to politics. During the American Civil War, Bingham was appointed State Treasurer of Missouri. He continued to stay involved in politics in the post-Civil War years through political appointments. In 1874, he was appointed president of Kansas City Board of Police Commissioners, and appointed the first chief of police there. In 1875, the governor appointed Bingham as Adjutant-General of Missouri, and thereafter he was often referred to as General Bingham.

Toward the end of his life, although quite ill, Bingham was appointed the first Professor of Art at the University of Missouri in Columbia, Missouri where he managed to see only a few students before his death.

One of Bingham's most famous paintings, this work is owned by the Metropolitan Museum of Art in New York. Painted around 1845 in the style called luminism by some historians of American art, it was originally entitled, French-Trader, Half-breed Son. The American Art Union thought the title potentially controversial and renamed it when it was first exhibited. It reflected the reality of fur traders' common marriages with Native American women; in Canada the Métis ethnic group formed as a result. The painting is haunting for its evocation of an era in American history—note, in particular, the liberty cap worn by the older man. The animal in the boat is widely accepted as a bear cub and not a cat.

* Appointed first professor of art at the University of Missouri
* The George Caleb Bingham House in Arrow Rock, his principal residence from 1837-1845, was designated a National Historic Landmark.

The George Caleb Bingham Catalogue Raisonné Supplement Of Paintings & Drawings, directed and edited by Fred R. Kline with advisory board members Paul Nagel and William Kloss, has announced the addition of ten recently discovered paintings by George Caleb Bingham, whose Bicentennial is being celebrated in 2011. The paintings exhibited, catalogued, and illustrated online at www.GeorgeCalebBingham.org include: “Horse Thief” (a narrative landscape), and portraits of Lewis Allen Dicken Crenshaw, Fanny Smith Crenshaw, Frederick Moss Prewitt, Civil War Lt. Col. Levi Pritchard, Charles Chilton, Samuel Chilton, Thomas B. Hudson, Missouri Steamboat Capt. Joseph Kinney, and a currently unidentified woman. The GCBCRS continues E. Maurice Bloch’s Bingham Catalogue Raisonné of paintings, begun in the 1940s, which includes Bingham’s known paintings up to 1986. Nearly all Bingham’s over 500 recorded paintings (460 are portraits) are not signed, including famous ones like “Fur Traders Descending the Missouri”, “The Emigration of Daniel Boone” and “The County Election”. Bingham neglected record keeping and signing, allowing scores of paintings to remain unidentified, more than any other American master. Eight of the ten paintings authenticated by the GCBCRS Committee were unknown to Bloch, the other two were unsolved mysteries; all ten were unsigned.
Posted by Admin at 8:05 AM