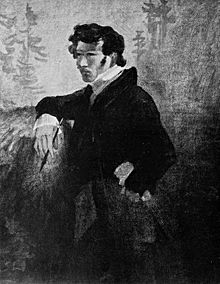 Born in Cottbus, he drew the attention of prominent architect Karl Friedrich Schinkel, who cast him as a decorative painter. Blechen however aimed for higher work and began producing landscape paintings. In 1827 he went to Italy, and from 1835 was a member and professor at the Akademie der Künste in Berlin.