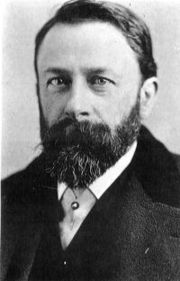 
Biography
Albert Bierstadt (January 7, 1830 – February 18, 1902) was a German-American painter best known for his lush, sweeping landscapes of the American West. In obtaining the subject matter for these works, Bierstadt joined several journeys of the Westward Expansion. Though not the first artist to record these sites, Bierstadt was the foremost painter of these scenes for the remainder of the 19th century.
Albert Bierstadt's Looking Down Yosemite Valley (1865), Birmingham Museum of Art, Birmingham, Alabama
Sierra Nevada (c. 1871–1873), Reynolda House Museum of American Art, Winston-Salem, North Carolina
Storm in the Rocky Mountains (Mount Rosa), 1886, Brooklyn Museum, New York

Bierstadt was part of the Hudson River School, not an institution but rather an informal group of like-minded painters. The Hudson River School style involved carefully detailed paintings with romantic, almost glowing lighting, sometimes called luminism. An important interpreter of the western landscape, Bierstadt, along with Thomas Moran, is also grouped with the Rocky Mountain School.

Bierstadt was born in Solingen, Germany. His family moved to New Bedford, Massachusetts, in 1833. He early developed a taste for art and made clever crayon sketches in his youth. In 1851, he began to paint in oils. He studied painting with the members of the Düsseldorf School in Düsseldorf, Germany from 1853 to 1857. He taught drawing and painting briefly before devoting himself to painting.
Map of Bierstadt's journey in 1859 and 1863.

Bierstadt began making paintings in New England and upstate New York. In 1859, he traveled westward in the company of Frederick W. Lander, a land surveyor for the U.S. government, returning with sketches that would result in numerous finished paintings. In 1863 he returned west again, in the company of the author Fitz Hugh Ludlow, whose wife he would later marry. He continued to visit the American West throughout his career.

Though his paintings sold for princely sums, Bierstadt was not held in particularly high esteem by critics of his day. His use of uncommonly large canvases was thought to be an egotistical indulgence, as his paintings would invariably dwarf those of his contemporaries when they were displayed together. The romanticism evident in his choices of subject and in his use of light was felt to be excessive by contemporary critics. His paintings emphasized atmospheric elements like fog, clouds and mist to accentuate and complement the feel of his work. Bierstadt sometimes changed details of the landscape to inspire awe. The colors he used are also not always true. He painted what he believed was the way things should be: water is ultramarine, vegetation is lush and green, etc.

Nonetheless, in 1860 he was elected a member of the National Academy; he received medals in Austria, Bavaria, Belgium, and Germany; and his paintings remain popular. He was a prolific artist, having completed over 500  (possibly as many as 4000) paintings during his lifetime, most of which have survived. Many are scattered through museums around the United States. Prints are available commercially for many. Original paintings themselves do occasionally come up for sale, at ever increasing prices.

In 1882 his studio at Irvington, New York, was destroyed by fire, with many of his pictures.